This Story Brought To You By

Bill Simmons doesn’t just discuss ballers for a living — he lives like them, too. The popular podcaster and ex-ESPN sports commentator boasts a world-class property portfolio that would put all but the very wealthiest athletes to shame. Chief among his holdings are a $16 million mansion in L.A.’s exclusive Hancock Park neighborhood, acquired just last year, and a $10 million cottage on Malibu’s Carbon Beach, in addition to at least two other multimillion-dollar homes.

Now the 51-year-old and his longtime wife Kari have added to their already portly portfolio by acquiring a second Malibu property, this one a 1.2-acre ranch spread tucked into the hills just above Carbon Beach. Anchored by a candy-apple red converted barn, the estate ran the couple a cool $4.7 million, per records. Ryan Jancula and Trevor Montano of Compass held the listing; Katie Bentzen of Coldwell Banker repped Simmons.

But the Massachusetts native can well afford his lifestyle, thanks to Spotify. Back in 2020, the streaming giant agreed to acquire The Ringer, the media company/podcast network Simmons founded in 2016, for a widely reported $200 million. (Simmons remains The Ringer’s CEO, and has previously pledged that the company will maintain its editorial independence despite the acquisition.) 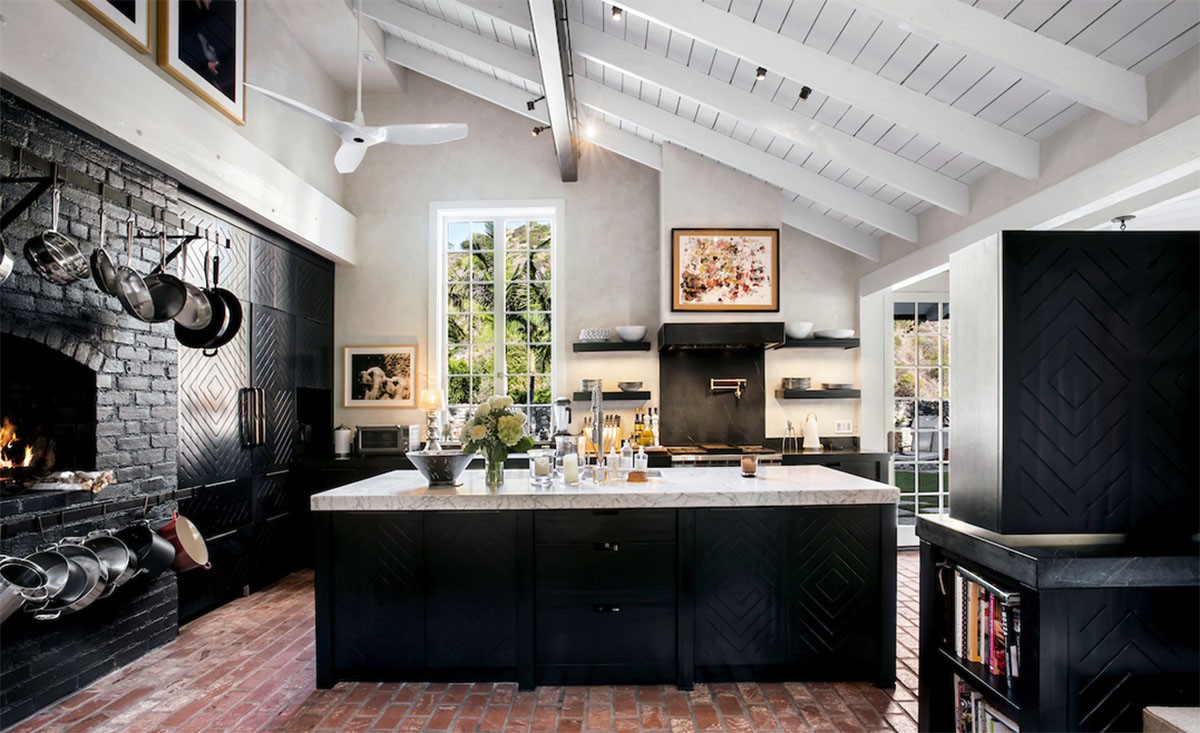 Built in 1940 and described in the listing as “a piece of Malibu history,” the once-rustic barn has been totally transformed into a chi-chi getaway that would likely make for an epic Airbnb, complete with a lap-lane outdoor swimming pool and a nearly all-new kitchen with designer Wolf and SubZero appliances. The entire property is walled and gated for privacy, naturally, and watched over by an elaborate security system.

Inside, the barn’s original red brick floors are mixed with trendy contemporary elements like marble and other imported stone for an authentic modern farmhouse look — and not the new-construction kind of modern farmhouse you often see in magazines.

The dining room sports its own wine fridge, plus a fireplace and seating for 10 guests. The stunning lounge/family room features wood-paneled walls and a vaulted ceiling that makes the floor-to-ceiling bookshelves even more appealing. Per the listing, the upstairs master bedroom and bathroom are part of the barn’s original hayloft area, now serving as a very swank retreat for the lucky homeowners. There’s also an ensuite guest bedroom upstairs, with big picture windows overlooking the lush landscaping. Outside, brick patios wrap around the estate, and well-maintained landscaping includes colorful perennials.

Various stone and brick pathways meander through the sycamore-shaded lot, eventually leading up to a wee guesthouse — more like a luxe treehouse, actually — with a bathroom, bedroom, and an office, plus a deck overlooking the main house.

This Day in History